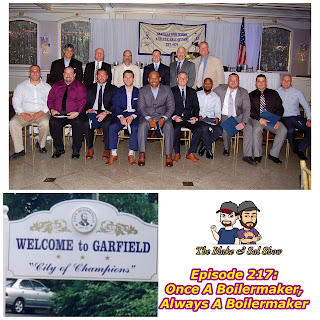 Blake is running solo this week to discuss his hometown Garfield, NJ. First there is a classic interview where Sal interviewed Hank Gola in 2015 about the 1939 National Championship Garfield Boilermakers and the history of the team. After that, Blake discusses his feelings and emotions being inducted in the Garfield High School Hall of Fame Class of 2018 as a member of the 1999 BPSL Championship football team. Finally, Blake sits down with Hank Gola again to discuss his new book, City of Champions, the meaning and history behind the phrase "Once A Boilermaker, Always A Boilermaker", Garfield's 100th anniversary and more history on the town. It's a cool listen even if you aren't from Garfield, enjoy!