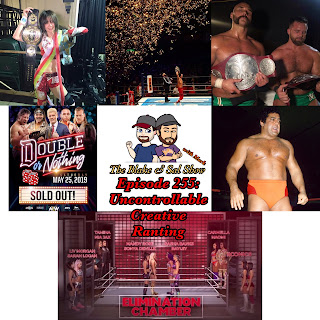 Mark is back this week and it's a crazy show. After discussing the teaser trailers for Frozen II and Aladdin, they get into a long wrestling segment. First Mark talks about the late Pedro Morales and then the craziness begins as they play the audio of Vince McMahon taking Becky Lynch out of the Wrestlemania main event against Ronda Rousey. Then after talking about the big title changes of the week, Blake plays audio from the WWE financial call when Vince McMahon talked about Ronda Rousey and how injuries has caused the ratings and live event attendance to go down, and that set off Mark and Sal to a rant that has to be heard to be believed. After everyone was calm, they discussed the AEW Double or Nothing Rally and get instant reaction to the breaking news that Double or Nothing is already sold out. Finally the guys break down the WWE Elimination Chamber PPV, including the WWE Hemp Championship match (wait till you hear Mark's pick for this one), the WWE Women's Tag Team Championship (Fire & Desire?), issues with The Miz & Shane McMahon as tag team champions and more.