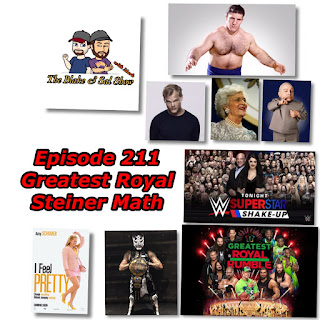 It's a jam packed show this week as the guys are back together again. First off we say goodbye to Barbara Bush, Avicii, Verne Troyer, Bruno Sammartino and Paul Jones and then Blake reviews and talks about I Feel Pretty. Then after discussed the latest Brew City Wrestling show, the conversation turns to the John Cena/Nikki Bella breakup and Impact Wrestling title changes, as well as new Scott Steiner math. Finally they break down the WWE Superstar Shakeup, look at Shinsuke Nakamura's new theme music and preview the WWE Greatest Royal Rumble. All that and more including an ITunes review, a voicemail and a moment that causing the guys to just break out in an unexpected laughter fit. Enjoy the show!