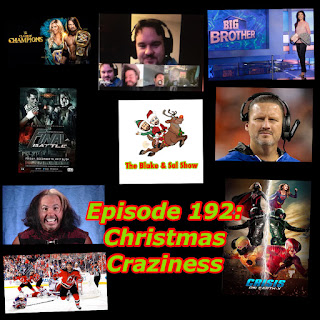 It's a wild ride during the guys' final regular show on 2017. After realizing why Blake, Sal, Mike and Scotty should rarely do a sports segment together, Mark and Kyle enter the studio and get into Celebrity Big Brother news, the Disney/Fox deal and review Justice League and Crisis on Earth-X. Then after the wrestling news and discussing Woken Matt Hardy and whos better Absolution or the Riott Squad Haydn Gleed joins the show to preview ROH Final Battle and finally preview WWE Clash of Champions.